In my previous article, I discussed a number of different factors that could possibly give the home team an advantage and investigated the existence of overall home ice advantage and the edge that the home team has in the faceoff circle. In this article, I will examine the remaining two factors, referee prejudice and impact of a team’s geological location, namely, the distance a team needs to travel, on its performance. The results are quite surprising.

As the reddit user Denana pointed out in his comment, the subconscious bias by referees to favour the home team because they are intimidated by the home crowd could be a major factor in a game considering how deadly power plays can be. A power play goal at the right time could completely shift the momentum or be the game winning goal of the night.

Scorecasting, the book mentioned by Denana, has been recommended to me several times by different people. I haven’t had the chance to read it and learn how it dissects home crowd influences on referees, but here is my method: I collected the percentage of penalties a team received at home, out of the total penalties the team has acquired in the season, for all 30 teams spanning 7 seasons from 2005-06 to 2011-12. For a lack of a better name, it will be referred to as “penalties @ home %”.

The formula is as follows, for those who might still be dazzled:

Referees will often choose to favour the home team because they are intimidated by the crowd.

7*30 team seasons/rows make a long chart, so I am only going to embed the lowest 30 penalties@home% team seasons (top 30 team seasons that a team has received less penalties at home than away, proportionately). The entire chart can be found here. 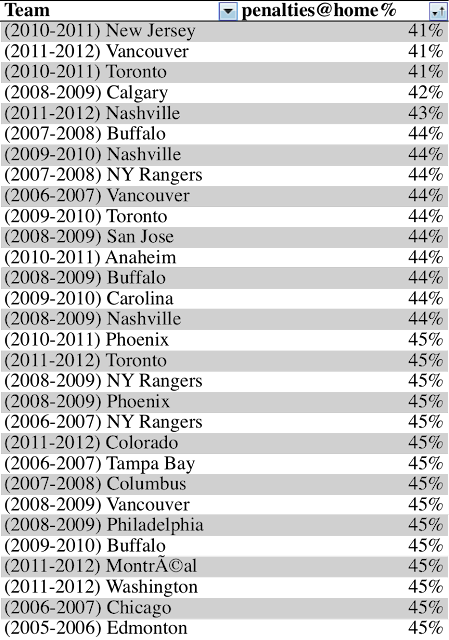 Interestingly, there are a couple of teams that had multiple seasons in the top 30 of 210 team seasons. Vancouver, Toronto, Nashville, NY Rangers, Buffalo each appeared 3 times on the top 30. 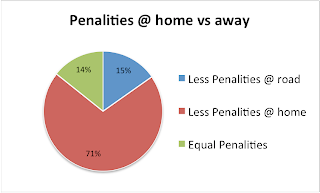 Over the 210 team seasons, the average team received 48% of their penalties in the season at home and 148 out of 210 (71%) teams seasons have had a form of referee bias, over 7 seasons. Although I do believe referees try to be as professional and unprejudiced as they can, they are also only human. It’s hard to always make the correct decision when half the time you make one, 20000 people frown upon you at the same time.Fortunately, occasional mistakes from referees doesn’t seem to affect the outcomes of games that much. There doesn’t seem to be a correlation between having a large referee bias between home and road games and performing better on home than road games.
If home ref biased affect games greatly, the data should have a best fit line with a negative slope (negative correlation). Instead, it looks like this: 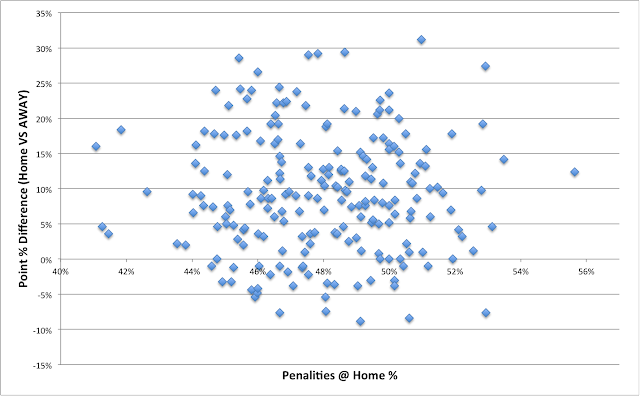 The data is scattered and there appears to be no significant correlation between ref bias and performance difference at home and away.

Not Calling a Penalty vs Calling the Wrong Penalty

Somewhat unrelated to the claim, but it is interesting to look at nonetheless. Given that human errors are unavoidable, should a ref be whistle happy or extra cautious? Hockey, ultimately, is a game you win by scoring more goals than your opponent. The 2012-13 league average power play % is 18.2%. This means that every time a ref makes a wrong call, either by missing a penalty or calling a wrong one, they are costing a team approximately 0.18 of a goal. But if they will cost 0.18 of a goal either way, then technically, it doesn’t matter, right?On paper, making a mistake either way seems to be equivalent, but what about the physiological impact it has on players? When the quality of referees is brought up in an argument, examples consisting of bad calls seems to be used much more than examples of missed calls. People tend to remember bad calls because it impacts their team negatively. When a call is missed for your team, although it has the exact impact as a bad call on your team on paper, you don’t dwell on it as much because you didn’t have a power play to begin with, whereas a bad call brings your team from even strength to a penalty kill. The difference is not giving you what you should have and taking something away, and studies have shown that losses impact people, psychologically, twice as much as gains of the same degree.With the evidence above, it’s easy to come to the conclusion that if referees must have a quota of mistakes, it is better for them to be extra cautious and hang on to their whistles, unless they are 100% sure the play was foul.

“Referees will often choose to favour the home team because they are intimidated by the crowd.”

Being a Canucks fan, commentators constantly remind me that Vancouver is at a disadvantage because of its geological location. If you are a big fan of the team, you might’ve even heard of GM Mike Gillis’ fatigue study program, where the organization have a team of doctors dedicated to studying how fatigue affects the performance. Everyone I have talked to seems to just accept this fact and assume the Vancouver Canucks are at a disadvantage because travel causes fatigue, and fatigue affects performance. Let’s put this theory to the test.

A team that travels more will have a higher point % difference because they lose more on the road, as fatigue lowers their performance.
I compared each team’s traveled miles and point percentage difference each season from 2008-09 to 2011-12 to see if there is a correlation between the two. I included the top and bottom 10 team seasons in traveled miles below. Here is the full chart.
Top 10: 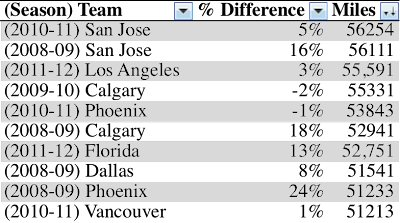 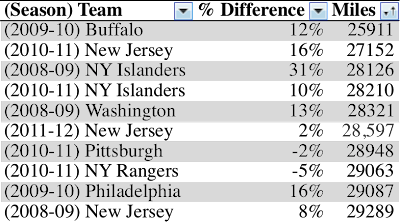 Using this data, I made a scatter plot graph: 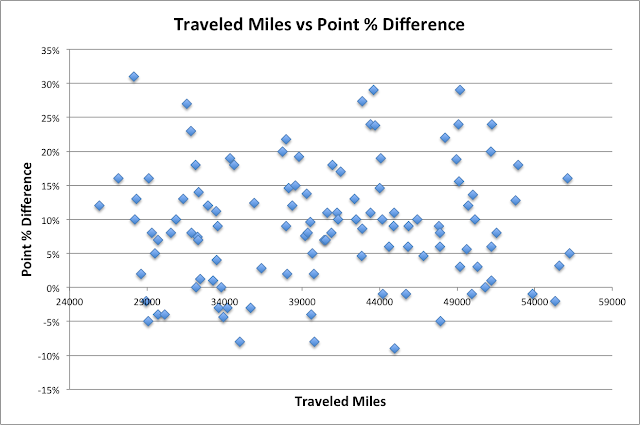 Contrary to what I and many other people believed, there actually appears to be zero correlation between distance traveled and the team’s performance. One explanation could be that when a team is located further, they’d have to travel more, but on the other hand, visiting teams will also have to travel the same distance, canceling out any disadvantage. Furthermore, NHL players are some of the best athletes in the world. Although I have not traveled extensively in my life to speak from experience, I highly doubt fatigue from sitting on a plane will affect a player more than the fatigue caused by the rigorous workouts these athletes have done all their life.

“A team that travels more will have a higher point % difference because they lose more on the road, as fatigue lowers their performance.”